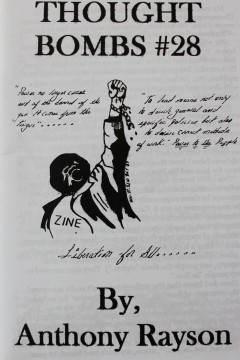 This 28th issue of Thought Bombs includes writings on terror, anarchism, prisons, and lots more by zinester Anthony Rayson. Includes contributions from other writers too, including an interesting piece on anarchist theory by an inmate at Muskegon Correctional Facility.

You can read an interview with Anthony Rayson here.