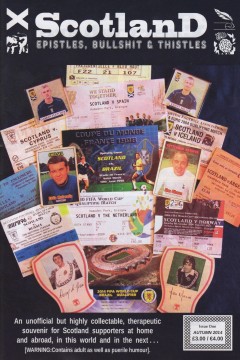 By Scotland Epistles, Bullshit and Thistles - 2014

The first issue of brand new Scottish football zine “Scotland Epistles, Bullshit and Thistles” describes itself as a “therapeutic souvenir” to help Scotland supporters cope during the wilderness years – they’ve had eight unsuccessful qualifying campaigns in a row. There’s loads of interesting articles from different contributors on the ups and downs of supporting Scotland around the world.

Copies of the zine were originally available to buy at the Georgia, Republic of Ireland and England matches in October and November 2014. You can send a message via their Facebook page and sort something out that way if you’re interested in grabbing a copy of this issue or any other issues for that matter. Failing that, just pop in to the library and have a look.