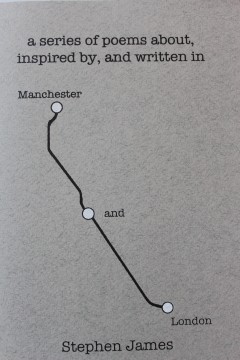 A Series of Poems About, Inspired by, and Written in Manchester and London

One of those zines where the title very much describes what’s inside. Manchester based poet Stephen James presents a series of poems with titles like “Chundergound” and “Chunderground II” for your enjoyment.

You can find out more about him and what’s he’s getting up to by going over to his Tumblr page here.