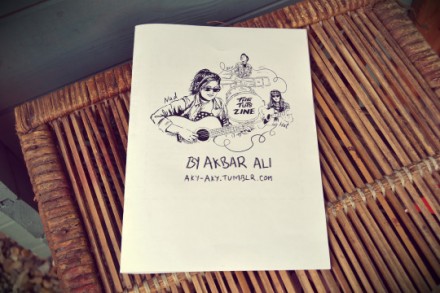 A Chat With The Tuts

I think I speak for the entire Salford Zine Library Team when I say that we’re big fans of The Tuts. We’ve got a copy of this zine about The Tuts by Akbar Ali in the collection and they’re playing for our pals Carefully Planned in February, so we thought we’d ask them a couple of questions.

Can you tell us about some zines you’ve read recently?

N: There was a gig in Coventry and there were loads of zines and I flicked through a lot of them. There was so many to pick from!

H: I read one in a punk house in America called ‘Are pigs really so Smart?’ by Fran Thompson. It’s a true story about a woman and her pig, it made me cry. I’d recommend it. My friend Akbar also bought me ‘Mean girls club’ for my birthday – its more of a comic I guess but it’s awesome!

Have any of you made zines before?

B: We did have one out actually that our friend Akbar Ali made with loads of illustration of us. It’s great.

N: We just haven’t had time to make a zine yet

H: It’s more we’ve put our creativity into other things. Like we used to hand make EP covers out of cereal boxes. We do a lot of handmade stuff in the same spirit as zines – like lyrics booklets and so on. Just not a zine yet. Nadia had this idea for us to make a Tuts handbook about all sorts of stuff like feminism, confidence etc. Which we still want to do!

You did a tour with Josie Long and Grace Petrie last summer and it looked like loads of fun. Can you tell us a bit about that?

N: The concept of the tour was amazing and it was a very positive thing. Free gigs, non profit, left wing, accessibility for everyone.

B: People were recruited last minute in local towns to perform which was great.

N: It was guerrilla gigging, showing up in a town and hoping you attract a crowd. Sometimes you attract the wrong type of crowd I guess – well just drunk people. But it was still cool. Luton was great. We’d love to do something like it again. We love Josie and Grace.

B: We have a pledge for our album coming out.

N: We’ve got loads of amazing incentives on our Pledge, really cool stuff. CDs, vinyl, t-shirts, gigs, covers of your songs, scrap books. 2016 is the year we prove our existence and WHY we exist. This is the year.

Keep your eye out for how you can help them fund their album over on their Facebook or their Tumblr or their Twitter (EDIT: you can have a look at their Pledge Music page now!). And if you really like The Tuts, we’ll definitely be playing them at this disco we’re organising in February that you’ll no doubt be fed up of us mentioning by now.