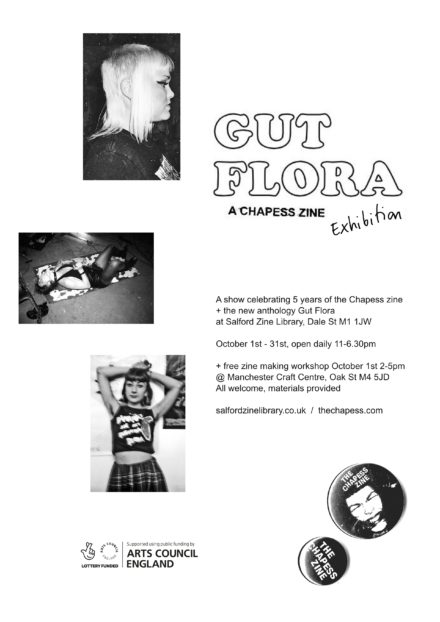 The next installment of our #twothousandandsixzine series of shows is almost here! We’re really chuffed to be celebrating 5 years of the Chapess zine and the recent release of Gut Flora, the Chapess anthology, with an exhibition that you’ll definitely want to come and see.

The zine library will be bedecked with photocopy photography by Jane Chardiet, Miyako Bellizzi, Alexis Gross, Eva Marie Nelson + more. If that wasn’t enough, we’ll also have all past issues of the Chapess on display, along with a selection of zines by women we love and a bunch of those who have been involved in the project over the last 5 years.

Pop in, have a little look at the exhibition (which is on throughout October) and check out the rest of the Salford Zine Library collection while you’re there. Hopefully it’ll inspire you to start making your own zines. If you think you need a bit more of a helping hand, Cherry Styles (the brains behind the Chapess) is going to be hosting our third Zine Club at Manchester Craft and Design Centre on October 1st. Come and have a go at zine making and have a chat with some nice people. It’s free and you can drop in and out whenever you like.

Want to know more about the Chapess? Here’s a brief but informative history from Cherry herself:

The zine was started by Zara Gardner in the summer of 2011. At the time we were both working in the art department of a rural college and would often introduce zines to our students to help engage them in design, research methods and self publishing. The first issue of the Chapess included contributions from female students and staff. When I took over as sole editor in 2013 I wanted to use the Chapess as a platform to champion some of the ace women writers I had been introduced through running my zine distro Synchronise Witches, as well as the work of photographers + artists I loved. I wanted to produce something which spoke to young women (especially) in a format that was accessible and trusted. I have been making zines for over 10 years and have never for a second doubted the power of DIY publishing; total creative freedom with plenty of room to fuck it up + start again.

Each issue of the Chapess showcases the work of women of all ages from around the world, employing an open submission policy, underlining the need for opportunities for women artists to show their work, particularly those who have not taken a route of education or training which had otherwise encouraged them to do so. As well as the printed zine we’ve put on shows, workshops and talks and acted as a point of contact for creative women on and offline.

In July I self published Gut Flora, a selected collection of work from the first 9 issues of the zine. The printing was entirely funded by pre-orders, without which the project wouldn’t have been possible. There’s going to be a second pressing very soon, to reserve your copy or find out where you can get hold of one http://cherrystyles.co.uk/synchronise-witches 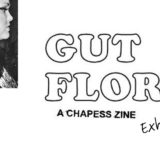 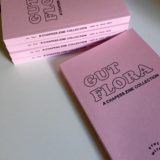